As of September 1, 2021, a pair of American bald eagles have been active at Brownie Wise Park. Shortly after arrival, they began their courtship. Their first egg was laid November 12, 2021 and a second egg was laid on November 16, 2021. The typical incubation period is approximately 35 days. The first eaglet was born on December 21, 2021; unfortunately, the second egg was not viable.

In early December 2021, Commissioner Grieb reached out to the families of Sergeant Sam Howard and Officer Matthew Baxter, two Kissimmee police officers slain in the line of duty in 2017, to help suggest eagle names for the public to vote on. “Starlight” and “Legend” were suggested for the female eagle with “Skyler” and “Unity” for the male.  Starlight was the most popular name of the more than 500 people who participated in the online poll with 70 percent opting for that name. Skyler received just over 59 percent of the picks for the male name. Starlight and Skyler have now successfully raised their eaglet.

In 2016, with the support and encouragement of Osceola County Commissioner Cheryl Grieb, The Florida Fish and Wildlife Commission and the Osceola County Parks and Information Technology Departments began work on establishing a live camera at a Bald eagle nest in Osceola County. A well- known and easily accessible nest was chosen at Brownie Wise Park on Tupperware Island Conservation Area. This popular Osceola County park can be found along the northern reaches of Lake Toho and within visual distance of the County Courthouse and downtown Kissimmee.

Osceola County Parks welcomes you to watch the live feed, as well as the recorded significant events that occur at this wild Bald eagle nest site. We encourage you to visit our nest camera site frequently to see what these magnificent birds are up to, especially between the months of November and July each year, when they are nesting.

What to Look For

Wild animals, such as Southern bald eagles are not totally predicable, so watch the live feeds often and carefully to see where our birds are in the courtship and nesting process. It is not uncommon for Southern bald eagles to even switch or abandon a nest. When they do abandon a nest, keep watching as another pair may take it over or even a Great horned owl may come in to use it.

What we can provide you with is a fairly predictable sequence of events that should occur, a range of time of year when those events should occur, and certain behaviors and changes that you should be looking for.

Events to look forward to

Feeding (done by both parents)

CAUTION: Watching wild nature can be both fascinating and occasionally upsetting. Be prepared to possibly see many types of animals (ducks, squirrels and possibly even an occasional feral cat) consumed by parents and nestlings during the season. Once in a while even nestlings might perish from adverse weather, disease and predation or maybe push a fellow nestling out of the comfort and safety of the nest. You are watching unscripted nature, so use your best discretion when viewing these birds of prey.

Florida supports the largest breeding population of Bald eagles outside of Alaska, representing approximately 19% of the entire number found in the lower 48 states. Florida’s Southern bald eagles represent approximately 70% of the total population in the southeastern U.S..

Osceola County is blessed with numerous lakes, making it an ideal location for Bald eagles to hunt, nest and raise young. It is not unusual to see a Bald eagle fly overhead or be calling from a nearby perch in downtown Kissimmee or St. Cloud on any given day. Osceola County has one of the largest concentrations of Bald eagle nests in the entire state. It is estimated that over 115 pairs of Southern bald eagles nest in Osceola County any given year.

Bald eagles build the largest nest of any bird found in North America. The largest measured Southern bald eagle nest in Florida was nearly 9 feet across and almost 18 feet tall. The heaviest Bald eagle nest on record weighed 4,000 pounds. Nest can get to be much bigger than the birds actually require each year, because they are added onto generation after generation for decades, utilizing the same nest site.

Both sexes contribute nest material, but the female does the arranging. A pair of Southern bald eagles will often have more than one nest in a territory, but will only use one per year. Our nest, on live video, is one of two nests constructed by the breeding pair at the site. Almost 80 % of Southern Bald eagle nests in Central Florida are found in Pine trees and 20% are in Cypress. The nest you are watching live is in a Cypress tree.

Southern bald eagle nests can be large enough for an adult human to sit in it. The nest is composed of large sticks woven to form a solid platform. As the nest grows, finer and finer twigs are utilized. The center is filled with dried vegetation. A hollow bowl shaped area, nearly 20 inches across and 5 inches deep on the very top, is lined with Spanish Moss and Pine bough.

Approximately 75% of active Southern Bald eagle nests successfully fledge an average of 1.5 young per year in Florida. Bald eagles pair for life unless one of the two die. The surviving Bald eagle will find another mate. 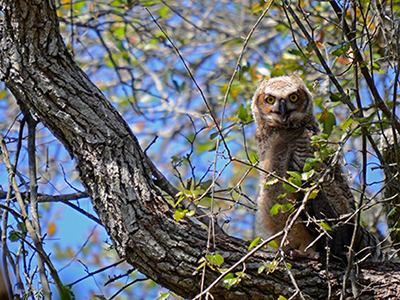 The Great horned owl (Bubo virginianus) is the largest owl found in Florida weighing between 3.5 to 4.5 pounds and standing over two feet tall. An adult wing span is nearly 5 feet. Non-migratory, they are present year round and begin the breeding cycle as early as mid-December. They are primarily nocturnal in nature. Calls are 3-8 low hoots in the middle C range. Female calls are a slightly higher pitch.

They do not build nests but instead use old Osprey, large hawk or Bald eagle nests that are 20-60 feet off of the ground. The Great horned owl pair and their owlets, seen on camera, are in an old Bald eagle nest, occupied by eagles the past two years prior. One of the earliest nesting birds of the season, they usually lay 2-5 dull white eggs. Both parents will incubate the eggs for 26-35 days. They will defend a nest very aggressively when provoked. New hatchlings will stay in the nest between 35 and 45 days and are fed by both parents. Only one nesting cycle occurs each year.

What do Owls Eat?

They do not build nests but instead use old Osprey, large hawk or Bald eagle nests that are 20-60 feet off of the ground. The Great horned owl pair and their owlets, seen on camera, are in an old Bald eagle nest, occupied by eagles the past two years prior. One of the earliest nesting birds of the season, they usually lay 2-5 dull white eggs. Both parents will incubate the eggs for 26-35 days. They will defend a nest very aggressively when provoked. New hatchlings will stay in the nest between 35 and 45 days and are fed by both parents. Only one nesting cycle occurs each year.

Other Owl Species in Florida